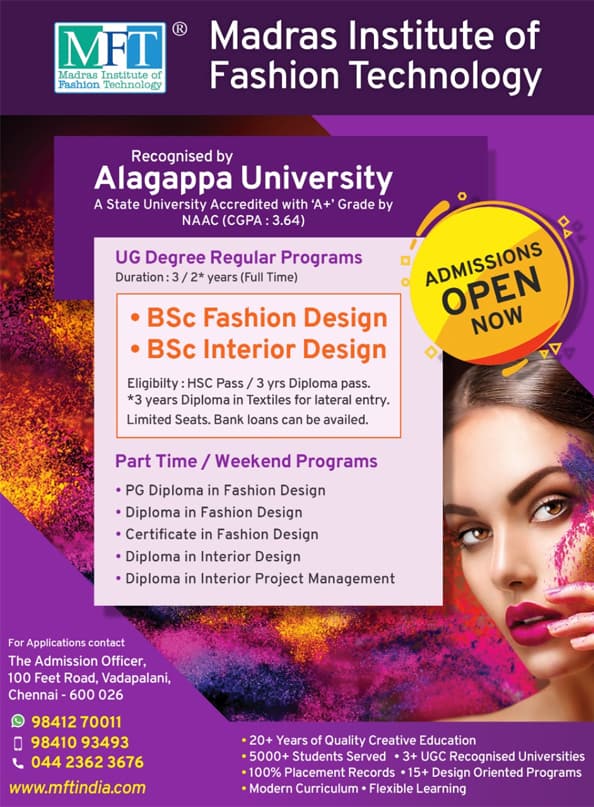 MFT has designed many courses as Diplomas, Undergraduate & Postgraduate Programs in the field of Fashion and other technical courses for those who are keen to pursue creative and technical studies on full-time and part- time basis via collaborated arrangements with the best Government Universities such as

The success of MFT has been largely possible due to the outstanding commitment of its efficient team, which trains the students to get through their examinations with flying colors as marked by the strict standards of the University. This has resulted in a rapid multifold increase in enrolment. Today, MFT has earned an international reputation for its high-quality curriculum, innovative teaching, artistic creation and community outreach.

ALAGAPPA UNIVERSITY
(State University Accredited with A grade by NAAC)

Alagappa University accredited with ‘A’ Grade by National Assessment and Accreditation Council (NAAC) is located at Karaikudi in Tamil Nadu. This University has emerged from the galaxy of institutions initially founded by the great philanthropist and educationist Dr. R.M. Alagappa Chettiar.

Alagappa University was brought into existence by a Special Act of the Government of Tamil Nadu in May 1985 with the objective of fostering research, development and dissemination of knowledge in various branches of learning. Alagappa University is recognized by the University Grants Commission (UGC) of India.

The University Offers Education Through

Through all modes of education, the University caters to the needs of the student community of around 1, 00,000.

The University is having International Collaborations with Universities / Institutions of Higher Learning in countries like China, Malaysia, West Indies, U.S.A. and South Korea. New innovative programs suitable are designed and offered at the University (for the foreign students). Many exchange programs attract the attention of the teachers and students from abroad.

UNIVERSITY OF MADRAS
(State University Accredited with A grade by NAAC)

Madras University is the mother of almost all the old Universities of southern India. The University imparts both Undergraduate and Postgraduate Education through the Affiliated Institutions which are spread over the districts of Chennai, Thiruvallur and Kancheepuram. Apart from teaching, research activities in Arts, Humanities, Science, Management and Technology are the main portals at the University.

A number of institutions affiliated to Madras University concentrate in research activities where Ph.D., Programs are available in their respective field of specialization. The University is also offering teaching and Research Programs in 4 campuses of Madras University. The 68 University Departments of study and research are spread over in 4 Campuses organized into 18 Schools each of which offer Post Graduate Courses in respective specialization, part time and full time Ph.D. Programs, Diploma and Certificate Programs.

The University has been accredited by National Assessment and Accreditation Council (NAAC) with the five stars rating first, and later with an A Grade rating. The UGC has recognized the University as one of the centres for potential for excellence in the country.

Based on the excellent performance, the University of Madras was accredited by NAAC at FIVE STAR LEVELS.

BHARATHIAR UNIVERSITY
(State University Accredited with A grade by NAAC)

The University is situated at the foothills of the popular Maruthamalai Hills in the Western Ghats range, in a sprawling campus of 1000 acres of land. As of now the University has 104 affiliated colleges, 92 Arts and Science Colleges, 2 University Colleges, 12 Management institutions and 1 Air Force Administration College. In addition, there are 25 Research Institutes of the State and Central Governments, which are recognized by this University for research purpose. And all these institutions cater to the educational needs of more than 1, 50,000 students and research scholars.

The Tamil Nadu Open University was established by an Act (No.27 of 2002) of the Legislative Assembly of the Government of Tamil Nadu to benefit those who have been deprived of and/or denied the access to higher education especially destitute, physically challenged, working men and women, economically weaker sections of the society, and those who discontinued education for various reasons, etc. In the main, it aims to reach the hitherto unreached. The University offers many programs in various disciplines.

“This step of the Government of Tamil Nadu shall prove a boon for women, physically challenged, rural poor and marginalized sections of the society and we are committed to support it academically as well as financially”.